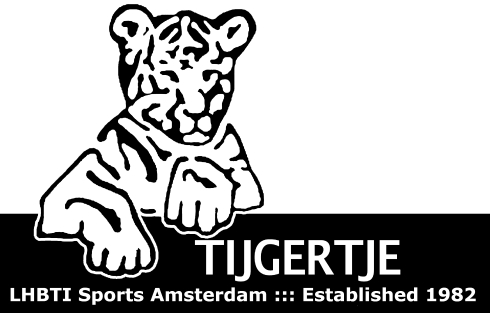 Tijgertje is the oldest LGBTi+ sports club in the Netherlands. At our sportsclub we believe everyone is equal. Whether you identify as gay, lesbian, bisexual, transgender, intersex, queer or heterosexual, you are more than welcome to join our teams at trainings in Amsterdam.

Send us a message if you would like to join a trial training (without obligation) at one of our sport teams.

Tijgertje began by offering self-defence courses in 1982 after an incident occurred during the Roze Zaterdag in Amersfoort where gays and lesbians were physically assaulted based on their sexual orientation. Since then, Tijgertje has grown into a social and versatile association offering a wide range of both individual and team sports. With nearly 40 years of experience, we’re still growing and going strong.

But why the name Tijgertje? Although it translates as “little tiger” in Dutch, the name has nothing to do with actual tigers nor Tigger (“Teigetje”) from Winnie-the-Pooh. Rather, our club takes its name from Teigetje, the boyfriend of the celebrated gay Dutch author Gerard Reve.

We use cookies on our website to give you the most relevant experience by remembering your preferences and repeat visits. By clicking “Accept All”, you consent to the use of ALL the cookies. However, you may visit "Cookie Settings" to provide a controlled consent.
Cookie SettingsAccept All
Manage consent

This website uses cookies to improve your experience while you navigate through the website. Out of these, the cookies that are categorized as necessary are stored on your browser as they are essential for the working of basic functionalities of the website. We also use third-party cookies that help us analyze and understand how you use this website. These cookies will be stored in your browser only with your consent. You also have the option to opt-out of these cookies. But opting out of some of these cookies may affect your browsing experience.
SAVE & ACCEPT
Scroll To Top